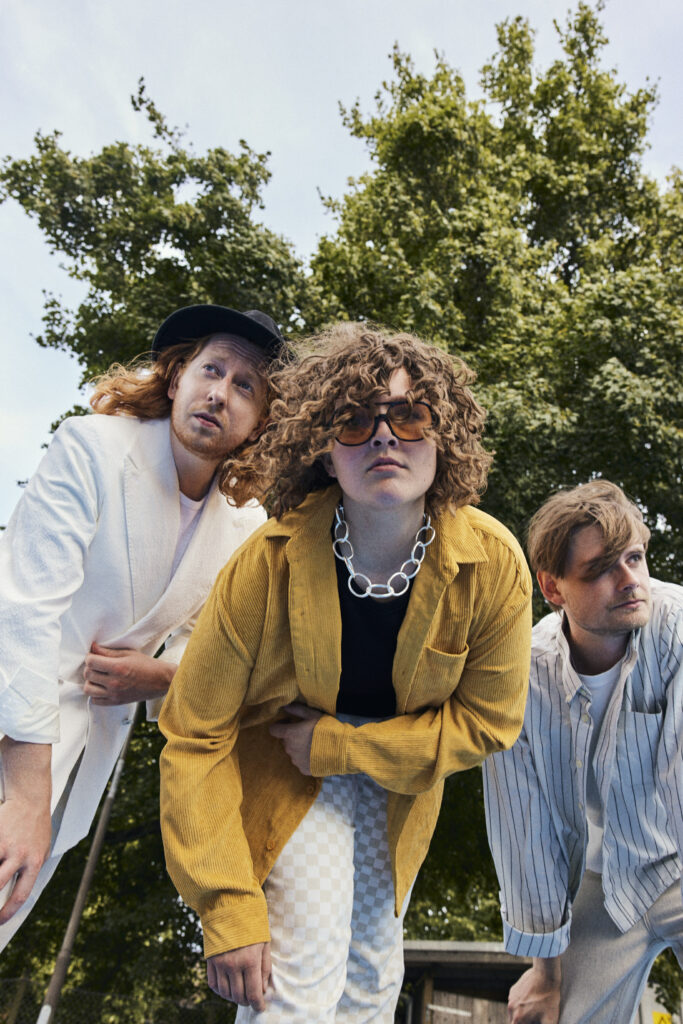 Artist & Songwriter // Signed to The Mgmt (powered by GL Music) since May 2022 // Label: Warner Music Denmark

Anna, Emil and Jeppe met in Odense 6 years ago and found out that they were made for each other. However, the creative energy of their new friendship was only really unleashed on a subsequent summer holiday trip that ended up defining their future.
Here their entrepenant egos transformed from running in separate directions like three wild horses to running together as a group with producer Ole Brodersen Meyer behind the reins.
They went from envy to respect for each other and redirected their respective strengths to the community and in a short time they wrote 10 songs.
With the boundaries released, it subsequently became 100 songs over the course of a year.

Here their entrepenant egos transformed from running in separate directions like three wild horses to running together in a bucket with producer Ole B Meyer behind the reins.
They went from envy to respect for each other and redirected their respective strengths to the community and in a short time they wrote 10 songs.
With the boundaries released, it subsequently became 100 songs over the course of a year.

Anna – vocals, guitar
Anna grew up in Esbjerg, Denmark with her father’s fascination of American hot rod cars with rockabilly and Lynyrd Skynyrd on the stereo. A concert with the Police in Aarhus was a turning point in her life and that same day she bought a guitar and set out to fulfil her dreams. Anna has also been a drummer in a punk band and as a young girl had green hair, studs and a rooster comb, rebelling against her cosy bourgeois upbringing.
The inspirations count: Joni Mitchell, Kate Bush, Jack Antonoff, Taylor Swift, Lorde, Anne Linnet, Linda Perry, Portishead, Bruce Springsteen, The Cure, Fleetwood Mac.

Emil – bass, guitar, keyboards
Like Anna, he also grew up during the teenage years with Green Day, whose combination of energy and melody left its mark.
“My dad took me to a Kashmir concert when I was 11 and it blew me away”
Grew up in a schoolteacher’s home. Was sent to piano in first grade with disciplinarian Lilian,
but later threw himself at his father’s newly acquired guitar, which revealed a new direction for Emil. At 16, he won – in best crowd-surfing style – the title of best guitarist at an Emergenza music competition, later, however, it was the bass that Emil ended up throwing his love into. Emil plays with inspiration of:
Royal Blood, The Big Bang, D-A-D, Kashmir, Taylor Swift,Katy Perry, Simon & Garfunkel, Bonnie Light Horseman, Goldfish, Green Day, Diana Krall, Chet Baker, Beatles.

Jeppe – drums
Jeppe grew up in Odense somewhere in the world of tunes, and he was on the sticks before he could walk. At the age of 10, his heart began to beat for the drums when he started lessons. His parents soon spent their limited funds on a drum kit, and the course was set. After meeting Emil and Anna in 2016, the beat has been pounded into place, especially during the pandemic when it was up to 5 hours a day of drumming when the band couldn’t meet and play together.
Inspirations : Fleetwood Mac, Radiohead, Stanley Donwood, Michael Strunge, Kate Bush, Future Islands, Patti Smith, Bruce Springsteen, David Bowie, Prince.